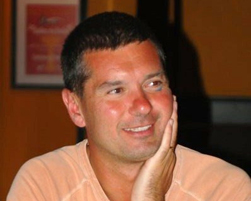 Simon graduated in Economics from the University of Warwick and then started working in the Financial Services Sector at Barclays Bank in the UK, spending 20 years with them building new distribution channels, and leading Group strategy projects.

In 2004, Simon made the move to insurance, leading Prudential’s UK’s direct distribution capabilities and designing a new model for the 21st century ‘Man from the Pru’. In 2008, as CEO of Aviva Singapore, he led the business to triple and double profitability in 2 years enhancing customer and staff satisfaction. He later moved to Kuala Lumpur where he has joined Hong Leong Bank as their new COO for Distribution.

Simon is passionate about contributing more to the world he lives in, and to Head Held High. He is looking forward to using his leadership skills, employing a structured approach and leveraging his professional network to help and support the development of the foundation.

To get in touch with Simon Newman, you can email him at simon.newman@head-held-high.org.