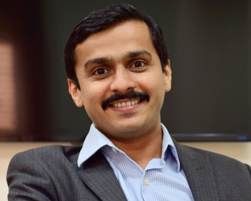 Rajesh Bhat, co-founder of Head Held High, hails from a small village in Sirsi, Karnataka. After completing his engineering, he started working as a software engineer for an Infosys incubated Company called OnMobile.

At the age of 25, in 2007, Rajesh decided to move away from the Software Industry and dedicate the rest of his life to enable the youth and children of the country to become more capable.

With the above vision, he helped start Head Held High Foundation in 2007. Magic Wand, was started as an associate organization of Head Held High subsequently, which was later run by him as a part of his overall responsibility.

Through Head Held High Foundation, Rajesh’s work has impacted lakhs of people directly and indirectly, and he has  now emerged as an influential leader in the space of Education and Training.

Rajesh is an inspiration to the youth of the country – as an educator, young entrepreneur, and a visionary leader.